Acacia Honey, Pure for Sure, 1 kg 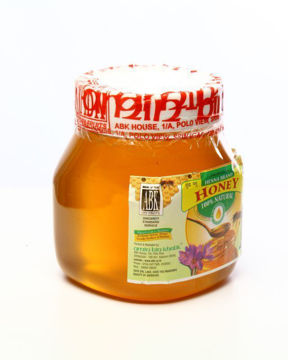 Premium quality of Acacia Honey from Kashmir, India. This Honey is not too sweet since there isn't any added sugar in it and, it keeps forever - Just that it should not get moist. Acacia Honey is specific to Kashmir and is among our best-selling Honey.
ABK12/04090000
₹ 800.00

Kashmir Almonds are natural and contain more oil than californian and Afghan almonds, as such they tase better and nutritionally they are recomended than theother two.
ABK49/08021100
₹ 1,500.00 ₹ 1,400.00
Related products

Premium Quality of 5 gm Original Kashmir Saffron. This Saffron is Original and handpicked from the odoriferous Saffron Flowers. The Saffron is dried completely and as such has a prolonged shelf life. This product is Guaranteed Original Kashmiri Saffron and at ABK as we mean Quality at its best!
ABK03/09102010
₹ 1,500.00

Best Quality Kesar available online. Kashmiri Kesar is world famous for its intrinsic quality as such it possesses a powerful coloring and flavoring capability. Just a pinch of this Kesar is enough to make your food flavorful.
ABK04/09102010
₹ 3,000.00

Best Quality Saffron in India at ABK. Our saffron has only longer strands giving you the best results with just a little quantity. Saffron is pure for sure and the best sells at here.
ABK05/09102010
₹ 6,000.00
Copyright © 2020 AMIN-BIN-KHALIK. All rights reserved.